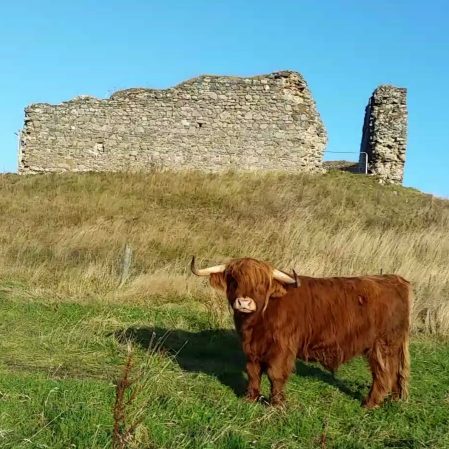 The ever popular Guardian of the Castle.

For a detailed history of our castle please go to the page written by Simon Forder.

For a professional guided tour of the area,  including Castle Roy, please get in touch with  John at Strathspey Tours.

Strategically located in Strathspey Castle Roy has changed hands many times through marriage and alliances. Alexander II granted the Lordship of Abernethy to James Earl of Mar in 1226. James was succeeded by his brother Duncan who ruled until 1244. To be succeeded by William who married into the powerful Comyn family. Comyn power was crushed in 1306 by Robert the Bruce.

Various factors held sway in the area with the fiefdom often returning to the Crown. In 1381 the title was granted to Alexander Stewart by King Robert. Again, oft reverting to the Crown until 1560, when Queen Mary made her half-brother, James Stewart, the first Earl of Moray. Subsequently, he rented the area to the Grants.

In 1592 John Grant gained the charter to the Lordship of Abernethy. This charter was confirmed by James VI in 1609.

Castle Roy would have been built towards the end of the Norman colonisation of Scotland. It is unique because it remains unaltered. The walls enclose a courtyard 80ft by 53ft (24m x 16m) and are constructed of glacial rubble rocks collected locally. Standing 25ft (7.6m) high and 7ft (2.1m) thick, the lime mortar remains very strong after 800 years.

The size indicates a staging post, a base for the local area Factor and a resting point for hunting forays into the Abernethy Forest. Its four thick stone walls protected various timber buildings inside. These would have included the Clan Chief’s dwelling, possessions, food, animals, soldiers and servants.

Architectural evidence in the walls in the garderobe area show the Chieftain’s latrine, while above, internal passages led to two other latrines. There is a corner tower which had two floors of which the window opening remains. The small arch in the west wall will have served as a daily access route while the main arch in the north wall will have been opened for the Chieftain, dignitaries and supply trains. 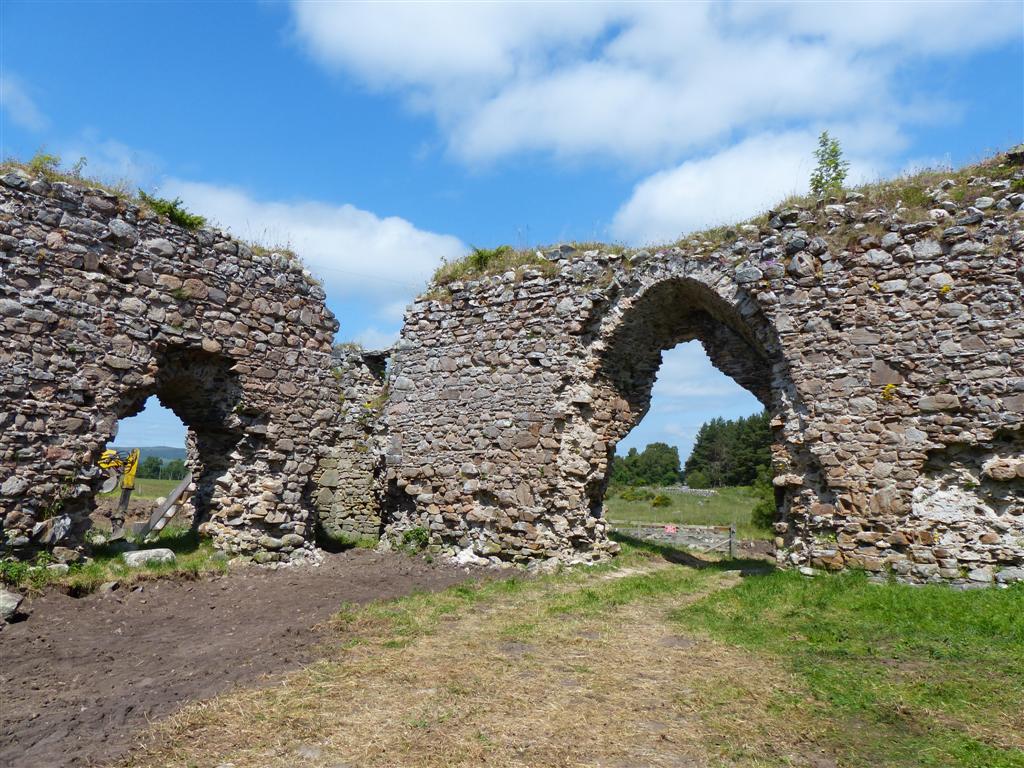 Castle Roy near Nethy Bridge – the north wall before consolidation

If you wish to help maintain this important part of Scotland’s ancient heritage, then please go to GoFundMe.

Or even look at putting your name on a square yard in perpetuity.

Theme by Anders Norén — Up ↑